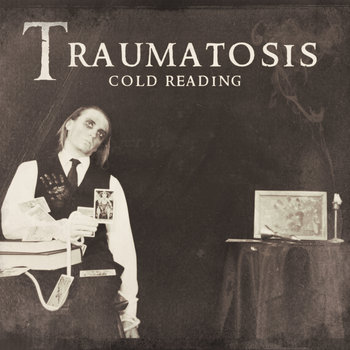 The debut album from Damon Martin's solo project. He and the band is from the north-east of Scotland. That normally means Aberdeen, btw.

I suspect that Damon Martin is carrying a Steven Wilson jr in his tummy. The Traumatosis image and philosophy is very Steven Wilson. Cold Reading is a lot less defined than Steven Wilson's projects. It is also a lot more 2012 like too. It is very difficult to describe the music on Cold Reading. A mix of minimalism, post rock, My Dying Bride, art rock, experiemental metal, hard core, death metal and some space rock. Post rock is the best label though. The very good vocals is both singing and spoken. The instrumentation is guitars, keyboards, bass and drums.

The ideas is good and Traumatosis has a lot going for it. It is lacking a lot in the quality stake though on this album. It feels like ideas has been laid out on a table without really being worked on. There are some good stuff here. But most of the stuff here is falling a bit short. It is a decent debut album well worth checking out. Link below.