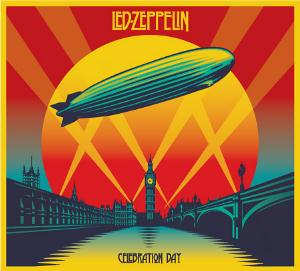 Led Zeppelin finally celebrated the end of the road with the legendary O2 gig on the 10. December 2007. A gig where Jason replaced his late father John on the drums. Countless bootlegs of various qaulity has been circulating after that heady night. Here is the gig, officially released as a movie and a double live album.

Led Zeppelin went out with much fanfare and hype. The gig though was a very fitting end to their career. Robert, John and Jimmy is undeniable older than they were in the 1970s when Led Zeppelin gigs crushed everything in their path. The Song Remains The Same and the How The West Was Won is some goose bumbs inducing live albums from that time. Led Zeppelin was head and shoulders above the rest of their peers at that time and is without any doubts the best ever rock act to have hit this planet.

Robert, John and Jimmy is not young anylonger and Jason is not his father. John Bonham's loose and wild drumming is sorely missed as Jason is much more a traditional drummer than his father. That is very noticeable on this live album. Nobody can replace John Bonham. But Jason does a great job nevertheless. Jimmy Page is doing a brilliant job. So is Robert Plant and John Paul Jones too. The new version of No Quarter is brilliant.

It must have been a very scary experience for these guys to try to live up to the Led Zeppelin name in this gig. At least Jason must had been under a lot of preasure. Living up to his father's legacy is impossible. But these four guys really pulled it off and delivered one heck of a gig. This gig is indeed what it says on the tin; a celebration day. A celebration of Led Zeppelin. Most of their best songs are here. I am only missing Immigrant Song and Bron-Y-Aur Stomp, the Sandy Denny duet. Both are probably impossible to play live for the band now. A major thumbs up to the version of No Quarter with the piano and guitar solos.

In short; this album is not as good as How The West Was Won or even The Song Remains The Same. But it is still a very charming live album, a great live album in it's own right and the best possible end to Led Zeppelin. John, Robert and Jimmy should be very proud of Celebration Day.