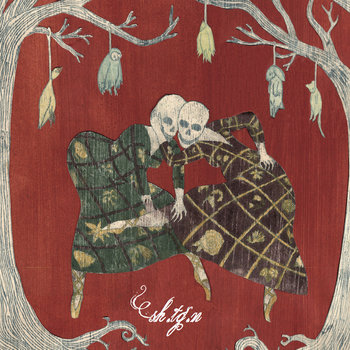 Time for a change - A line from Eyjafjallajokull, the third song on this album.

The debut from this band from Belgium. A side project of the jazz/fusion band The Wrong Object. This album has been released on Moonjune Records.

When listening to this album, the first thought that enters my head is that this band is very far from safe Moonjune Records territory. The label has pushed the boat out on this album and has ended up in an unfamiliar river. Then again, maybe not. There is no denying that this album makes a heck of a lot noise. The band bombards the listener with a type of music which is well into both metal.... and jazz. The use of vibraphone anchors the album to the jazz genre. And what is jazz again ? Well, many will argue that what this band is doing is jazz. Then again, this album makes a lot of noise with it's hardcore and at times; the rumblings of death metal. How do I label this album ? Death metal meets jazz ? Grindcore meets jazz ? Sludgecore meets jazz ?Yes, sludgecore meets jazz.

Knock me over with a feather, but the result is a great album. The use of vibraphone is great and adds pure quality to this album. Thank you, Wim Segers. The hardcore/grindcore vocals too works. Ditto for the at times distorted grindcore sounding guitars. The keyboards adds some melodies to the mix. The bass and drums churns out some thunder and lightening. The songs slowly creeps in after some listening sessions and particular after overcoming the shock. Sludgecore meets jazz....... Yes, this mix actually works. This album proves it. An album which also includes some great Black Sabbath'ish riffs too.

I really applaud Leonardo and Moonjune Records for pushing the boat out on this album. An album which may be genre creating. I don't know about that. This album is a great addition to my record collection though and a great album in it's own respect.