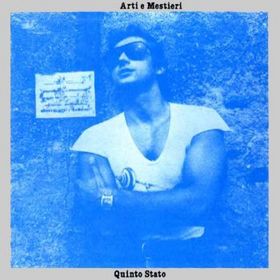 The third album from this Italian fusion band.

After two great fusion/RPI albums, Arti e Mestieri goes a bit commercial with a mix of light hearted fusion and pop. The synth sound is pretty bad and the song material not that good. The band tries to compensate for the quality shortcomings with a couple of Italo pop songs. Two big failures. The rest of the music is in the lounge jazz genre. The woodwinds sounds both light and fluffy. Ditto for the vocals and the rest of the musicians. There is no real bite in the music. No real substance.

The quality is pretty poor throughout and Quinto Stato is in my view a pretty big failure of an album. I hope it is the only failure in their discography as I have invested pretty heavy in it. This album is merely a decent album.