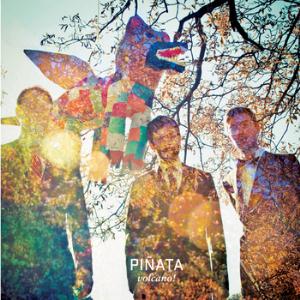 I am not entirely sure what to think about this album as it is a serious challenge. Style wise, they are somewhere between The Smiths, indie rock, calypso, French rock and space rock. That and total madness.
The male vocals is really over the top. They reminds me about some of the sounds coming from the patients which men in white frocks has been chasing down the street outside our local mental asylum. OK, I am half joking there. These great vocals is very special, though. Thom Yorke, they reminds me about.

The music is performed with a lot of electric and half acoustic guitars, keyboards, bass and drums. There is a lot of post rock feel over the guitars.

After overcoming the shock, I find this album a pretty good album. It is certainly blowing away the cobwebs in my brain. There is no great tracks here though. It is a good album and one I am glad I learned to know. I don't think I would really become a member of their fanclub, though. Pinata is recommended to those who want something special.