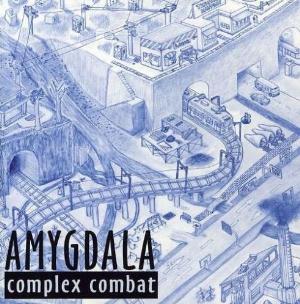 The second and so far final album from this Japanese band. A band listed in most archives as zeuhl.

The music is dark as the devil's paintkit. Dark and very claustrophobic one dimentional. It never breaks out of this pattern throughout it's forty-six minutes. Forty-six minutes of unrelenting instrumental RIO in the vein of Univers Zero and Present. The harsh music is performed with hammond organs, bass, guitars and drums and synths. I would not label this album as zeuhl at all. Neither would I label their self titled album from 2004 as zeuhl. Amygdala is a rio band.

The quality of the material is good throughout. The music is very technical throughout. It is not easy to grasp it. It is by no means a great album either and I very much prefer the debut album to this album. I award it a weak good status, but nothing more.