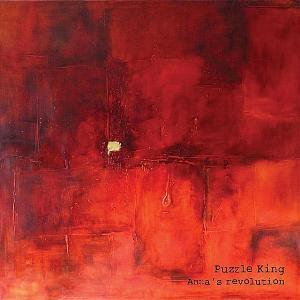 This review is also incorporating the English version of this album called Anna's Revolution from the same year.

So, why two albums ? Puzzle King is the brainchild of François Puzenat. His background is from the French jazz/fusion band Vertigo. The Anna project is his first solo project and has been fermenting in his head for fifteen years. I have been in touch with François on email to get more info about this split into two albums. His answer is that Anna is the French language version. I first got Anna's Revolution, which is the English version and François were kind enough to send me a link to a promo copy of Anna.
Why an English version of the same album ? Unfortunate, this is an English speaking world and Anna is a concept album about Anna and Antonie being caught up in the Russian revolution between 1913 and 1917. The lyrics is important and he felt that the English audience would not grasp the French language Anna album. Which indirectly or even more directly is discrimination based on language. The unfortunate discrimination of the French and other languages by the English speaking world. I understand where Francois is coming from.

I think it is now pretty well known that I am a big fan of French prog and I don't speak a word French. I love bands like Ange. Not to mention Magma and the zeuhl genre. I also happens to really like French people as I happens to like any other decent human beings. Discriminations towards French people because of their lovely language is something I find abhorrent and very offensive. I also happens to believe that Ange's and Christian Descamp's music is great, largely because of the French language. I would never ever want to hear Ange's songs in English.

Speaking of Ange....... Ange is very much in my mind when listening to Anna. François Puzenat has though listed a lot of classical English bands like Genesis & Co as his inspiration. Ange is not mentioned, though. Ange was the first name I knotted down on my notepad when listening to this album. And that is paying François a compliment, btw. That and a reasonable objective observation. Puzzle King and Ange shares a lot of the theatrics and the French folk rock (Brel & Co) which has made the French scene so vibrant and exciting.

The music on Anna is being performed on guitars, keyboards, drums and bass. The music is very flowing and dynamic throughout. It has this great French scene feel from the 1970s which should make every fan of this scene throw money at this album. The overall quality is very good throughout. Anna does not have a great song though and that is my only gripe with it. I am an unrepentant Ange fan and finds a lot of similarities. A half a point upgrade to a great album status may be coloured by my Ange & French prog scene fanboy status.

Moving on to the English language version Anna's Revolution. That was the version I heard first and it immediate hit me how unnatural it was. No dynamics and no fluency. This culprit was evident and raised it's ugly head pretty immediate. It was the change of the vocals from French to a pretty bad English (sorry, Francois). It is not a pretty listening and I was cringing many times after been listening to the French version half a dozen times. Yes, I now get the concept story. But this is a story which I gladly would had been happy to read in English if Francois had put it out on Bandcamp as a pdf or straigth out there together with the French version. Anna's Revolution is not a good album and it looses one and a half point from the French version. I can safely say I will never ever listen to that album again.

So, let me repeat this: Anna in the French version is a great album and one every fan of Ange and French symph prog should get. On the other hand; forget Anna's Revolution.

Both albums are streamed on the link below and make up your own mind.