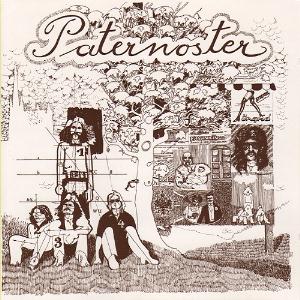 A one off album obscure band from Austria. Very little is known about them. This album disappeared into obscurity too soon after it's release. Two re-releases has again brought it to our attention. This album has rightfully claimed a cult status.

The basis here is krautrock and Paternoster should be labelled as a krautrock band. Which they are. Paternoster is not the usual krautrock fare, though. Take a chunk of The Nice, add some pastoral Genesis from the Trespass era and add a lot of Agitation Free to the mix and you get Paternoster, the album. Most of the music has this church or even cathedral organ sound. English vocals and distorted guitars is added to the cathedral organ sound. Bass and drums is added as the final touch.

The result is pretty dark pastoral krautrock which is very gloomy at times. The sound is great, but the vocals is too much in the forefront. That and the lack of a killer track or two is my gripes with this album. A cult album and one I cannot compare with any other albums in my collection. This album is pretty unique and well worth checking out. It is a very good album.