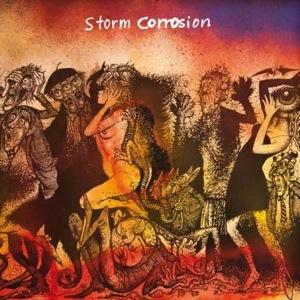 The much hyped cooperation between Steven Wilson and Michael Akerfeldt. The two darlings of today's prog rock scene.

I may sound overly sarcastic and unfair. I do not mean to be negative. Both  Steven Wilson and Michael Akerfeldt has done wonderful things for the music scene and they are rightfully so the biggest two profiles in today's prog rock scene. When they team up, the result is justified hype.

Steven Wilson comes in from a more eclectic direction and Michael Akerfeldt from a more death metal direction. By logic, the result should had been a mix of those two genres. Storm Corrosion is anything by a logical step from those two guys. That is a positive in my view. Let them wait in suspense and then give, the general public, a big surprise.

Storm Corrosion is a big surprise indeed. It is an ambient folk rock album with a lot of the Scandinavian melancholy and the English quirkiness. It is a truly remarkable album by any standards. A bolt of lightening I did not expect and one it has taken me a long time to devour.

The songs are performed with mellotron, guitars, drums and woodwinds. Steven's vocals has been hidden down in the mix and works more like an instrument than traditional vocals.