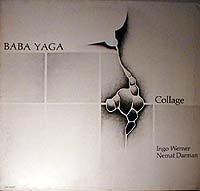 The first of altogether two albums from this German band. A band who rests well within the Krautrock genre.

I have learned from the box of krautrock albums I have resently purchased that this genre has a lot of variety in it's expression. From the all out jazz assault to some pretty ambient stuff. This album is on the ambient side of the genre. It is so ambient there is barely any pulse in this album at all. Yes, I also like ambient krautrock albums as long as there is a concept and some purpose behind the music. There is no particular purpose in this album, though. Some piano, synths, electronica, drums and an Indian subcontinent feel in the beginning, replaced with nothing at the end. There are some subtle Soft Machine references here. But only faint. The sound quality is not bad. The quality of the material is bad, though.

Krautrock is a great genre. This album though is best both bypassed and ignored though.