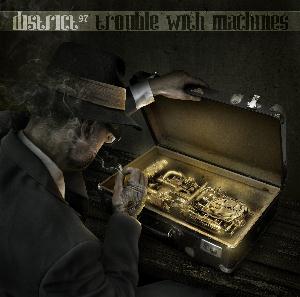 District 97 is an American band and Trouble With Machines is their second studio album. Their debut album Hybrid Child was released in 2010 to critical acclaim. They have also released two live albums (!).
This band is regarded as the new big thing in the rock/prog scene and has got good support from Laser's Edge.

District 97 is female fronted and Ms. Leslie Hunt does a great job at the microphone. She is helped by John Wetton on one track. The music is a mix of neo prog, prog metal, a lot of pomp rock and a lot of symphonic prog. It falls well within the Art Rock label. The songs are both long, epic and intricate. At times, the music is very majestic and epic. But most of all; District 97 reminds me about the many female fronted English bands now. Touchstone, Panic Room etc etc. District 97 is a US band though and that shines through. Less neo prog, more pomp rock in other words.

The songs are all very good. My only gripe with this album is the lack of any true great songs and/or melody lines. The one missing ingredient which sets them apart from the rest of the female fronted bands. I have no problems understanding why this band is so highly regarded though. This album may not break them, though.