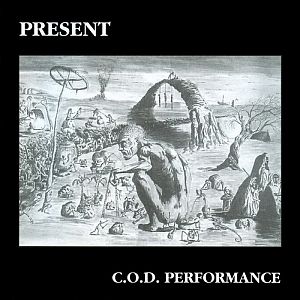 The Belgium band returns after a long break with their third album.

Present is a splinter group from Univers Zero. They have played on many Rock In Opposition festivals and I believe they are also featured in the new movie Romantic Warriors II – A Progressive Music Saga: About Rock in Opposition. Or maybe not. In any case, they belong in that musical category.

Normally, that is. C.O.D. Performance is a deviance from their first two albums. Albums which was pretty crass brutal in it's avant garde sound paintings. C.O.D. Performance though is very pedestrian with little left of what made me really enjoy their first two albums. The music on C.O.D. Performance is almost post rock and ambient. There are even some vocals here too and some normal rock melodies. Thankfully, the end of the album, Alone 2, has some good avant garde harsh guitars which for me is what Present is all about. The rest of the album is not particular good.

This is a big step in the wrong direction for the band and only a decent album from a band I really like.