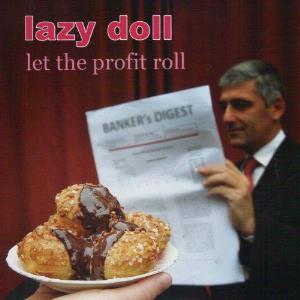 The debut album from this French band, released through Musea. The cover art work is rather bizzarre and so is the band name. Not to mention; off putting and perhaps an own goal.

I am an avid fan of the French approach to music. In particular their rather weird take on the British progressive rock scene. Lazy Doll is unfortunate not among these bands. Lazy Doll is four friends who has a lot of fun incorporating the best elements of Led Zeppelin, Frank Zappa, Genesis and Pink Floyd into their own music. The music on Let The Profit Roll is not particular original as it is a brew with those four bands. No riffs or melodies has been copied. The music is so heavy coloured by these four bands though that the listener is not left in the dark about the main influences behind this album. The English vocals are rather weird in the French tradition. The melodies a mix of decent to great. The great parts is when the Genesis influences shines through. There are a lot of these influences here and I really enjoys that.

This is a good album and I sincere hope it has been released as a showcase for this band as a live act well worth booking. This is the type of music which will bring the houses/pubs/concert halls down and win Lazy Doll a big following. I hope they follows this advice and that the booking agents sees the huge potential here. An advice I am sure I am not alone giving them.