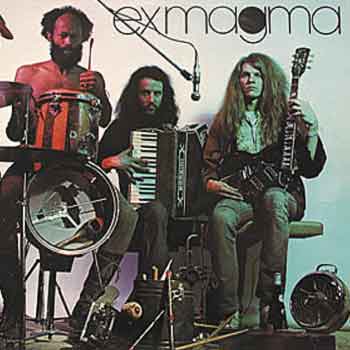 The debut album from this German band who released three albums before they went their separate ways.... or so I believe. Their final album was released in 2006 and maybe we are in for some more albums.

Exmagma was originally named Magma. But we all know the French band with the same name so they respectfully changed name to Exmagma. Fittingly enough, I would say.

This trio created a lot of cosmic krautrock with Hammond organ, sax, guitars, bass and drums. That and some tape recorders and loops.

The first part of this album reminds me about Soft Machine a lot. The middle part is pure cosmic, electronica infused krautrock with a lot of loops and avant-garde plodding. The third part is a return to a much more jazzy landscape in the vein of Soft Machine again.

The end result is a bit of a frustrating album. It is most certainly not an easy listening album. I am not a fan of the middle part of this album where the avant-garde is pretty aimless plodding around in search of life on Mars. No life found is what I can report. I very much prefer the jazzy bits on this thirty-five minutes long album.

The end result is a fine, good krautrock album. I will give their second album a chance too in the coming days. Check out this album.