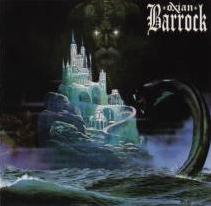 The second out of total three albums from this Italian band.

Italian progressive rock with female vocals is what this band was pretty famous for. A bit of a rare combination, I have to say. I really liked their debut album too which was a great Italian prog rock album.

Oxian is a bit of a different animal altogether. The band has turned their attention towards the very strong goth rock scene at that time. That is perhaps why we get two synth players and two female vocalists here. The two vocalists gives off some goth vocals. The synth players takes the goth theme a lot further and into the dungeons of a church. We get some church organs synths here throughout this fifty minutes long album.

The whole concept reeks gothic and I am not a big fan of that scene. In particular not when a promising Italian prog band morphs into a goth rock band. Not a great development in my view, although this was 1994 and the goth scene were miles stronger than the prog scene that year.

There is no really good music here either and the vocals sounds a bit plastic too. This album may be a good soundtrack for a Dracula night in a student bedsit. Besides of that, this album is not recommended. It is a decent album though.