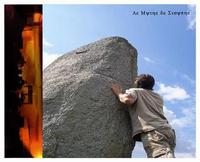 I reviewed their debut album Analogue three years ago in ProgArchives. They have this band listed as a neo-prog band and I noted how little neo-prog that album was. That same observation also goes for this album too. Forget neo-prog. There is none of it here. There are some hints of Pink Floyd, but these are pretty faint.

This twenty-six minutes album got a lot of French vocals, electronica, guitars, keyboards, drums and bass. It also has some Arabic music and a lot of alternative, indie music in addition to electronica. The music also has a lot in common with krautrock too. This album is to a large extent a krautrock album.

The album is very short and pretty frustrating too as it has no real good melodies. The band tries and tries their best, but does not manage to pull of a good album. Their homepage with this as a free download album has also been pulled. It seems like this band is now a lost cause. This album has something going for it, but not much. It is a decent album.