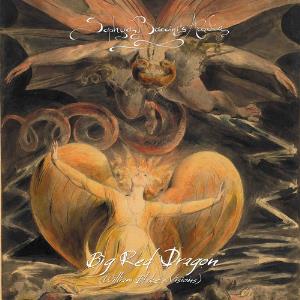 The second solo album from Sophya Baccini. She is a highly skilled vocalist with six albums with Presence and some other albums as a studio musician. That include the final Delirium and Osanna albums.

Her debut album Aradia from 2009 was quite a good album. This time around, she has gone down the concept/rock opera album route with this album about William Blake's visions. I notice that the number 666 is pretty prominent here and would not recommend playing this album in the presence of religious persons. I did that and was told of, henpecked as I am.

The music is the normal rock opera routine. Sophya's excellent vocals on the top of some piano, classical orchestral instruments, guitars, bass and drums. That and a lot of help from a male vocalists. Christian Descamps from Ange, Sonja Kristine from Curved Air and Lino Vairetti from Osanna contributes here in addition to members from Tempio Del Clessidre and Death SS. An impressive guest list, I have to say.

The music is as operatic as I expected. That means a lot operatic throughout these seventy-two minutes this album last. There are some really good stuff here and not so good stuff. It depends on the willingness to embrace the rock opera concept. I am not a big fan of it.

Nevertheless; this is a good album where Sophya's vocals adds another half a point. OK, this is a very good album then. Check it out.