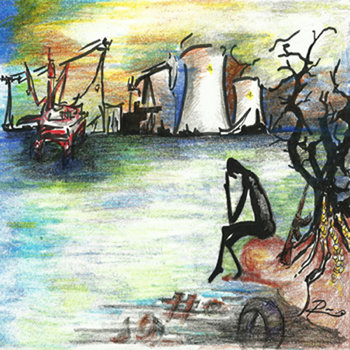 The debut Bandcamp album from this Cadiz, Spain based band. The band is still playing live, but this is their only album to this date.

The band has called themselves an alternative rock band. They have also tagged their Bandcamp album as a prog rock album. I happens to agree with both tags. They are indeed playing modern prog rock in the vein of the new wave of prog rock. This is by no means retrorock as the countless Yes and Genesis copycats.

Take alternative rock, add some post rock, fusion, psychedelic rock, Spanish folk rock and some good old prog rock. Then you loosely gets this album. The instruments are keyboards, guitars, flutes, bass and drums. There are some vocals here too.

This is a debut album and the band is trying out a lot of things here. It is also a free download album (see link below) and everything is allowed here. The end result is a forty minutes long album which includes a lot of changes in style and contents. The band still manages to keep it together reasonable well.

Some parts of this album is good. Other parts is decent to good. I do not want to discourage this band so I am elevating this up to a good rating. It is most certainly worthy the free download and your attention. Get it and make up your own mind.