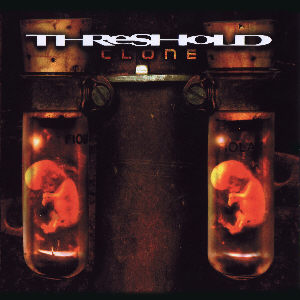 The band was a five piece band with a lineup of guitars, keyboards, bass, drums and vocals.

The band had again changed vocalist from Damien Wilson, who did the vocals on the previous year's Extinct Instinct, to Andrew McDermott on this album. Changing vocalists is never a good thing for a band like this. But Andrew McDermott fits in very well in Threshold.

The music is again somewhere between progressive rock and progressive metal. This is their niche and they are really comfortable here. They have indeed also got their own sound too.

The mix of keyboards and guitars are really good. So is the drums and the bass. The vocals also fits in very well.

There is some songs here which is still very much played by the band. Songs which all concerns the theme of cloning. A big theme back then. Clone is a bit of a concept album.

The music is still melodic with a lot of prog metal guitars and heaviness. There is also some really very good details here too.

And this is indeed a very good album which must be pretty high on everyone's list of top Threshold albums. Of their first four album, I rate this as their best album. Check it out.