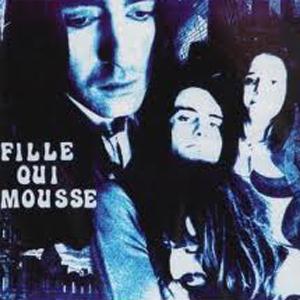 Fille Qui Mousse, who also called themselves Trixie Stapleton 291, was an eight piece big band who released their only album on a very obscure record label. It was picked up and re-released in 1989 on CD. Rightfully so, too.

Their lineup was guitars, bass, percussions, piano, violin and effects.

The band is listed as a krautrock band. Hence, that got my full attention and I got this album. Krautrock is one of my favourite genres.

It has to be said that krautrock is a very wide genre who includes mostly everything weirdly sounding music. This band is on the very weird avant-garde end of this spectrum.

I guess the recording budget was minimal. It sounds like that. Most of the stuff here sounds improvised and made on the hoof.

This thirty-five minutes long album starts with a proper psychedelic krautrock piece. It goes over to a diddly-dei avant-garde piece where sound effects is being tried out just to get the minutes going. Then we are back into krautrock territory again.

The two krautrock pieces are good. I like avant-garde a lot. But the avant-garde pieces here are really bad and lacks any imaginations. So the law of average tells me this is a decent album. Check it out if you want.