Greenslade. Dave - The Pentateuch of the Cosmogony (1979) 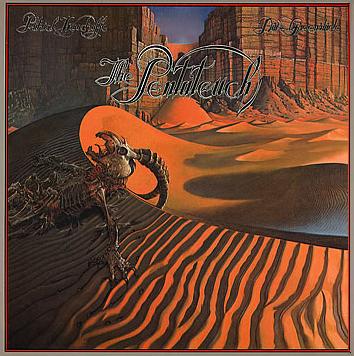 The second album from this British legend.

Dave Greenslade was previously in the bands Colosseum and Greenslade. He broke off and did his five solo albums. Cactus Choir from 1976 is his best and most famous album.

This one though is the most infamous album. An eighty minutes long monster.

But it is also a monster who has greatly influenced techno, ambient, new-age and electronica music. It should not be underestimated.

Dave Greenslade plays all kinds of keyboards and everything with tangents attached to the instruments. Strangely enough, Phil Collins is the drummer on those tracks who requires drums. Yes, THE Phil Collins. John Lingwood also helps out on drums and percussion. Dave's own daughter Kate helps out with children voices.

Everything here is very electronica. Very synths and keyboards orientated. But there is actually a considerable amount of drums and percussion here too. There is rhythms on this album.

Most of it is avant-garde music based on synths. Which is not my cup of tea. Nevertheless, a lot of the stuff here is not bad. This is actually a decent enough album. One I am sure will interest a lot of people out there. Check it out.