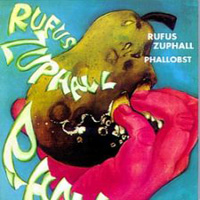 Rufus Zuphall was a five piece band with a lineup of flutes, bass, drums, guitars, keyboards and German vocals. Male vocals, that is.

This band has always been regarded as Germany's answer to Jethro Tull. When it comes to this album, I don't really understand/get that comparison. Phallobst is something different again.

OK, we can always start in Jethro Tull area aka Songs From The Wood. And then we make our journey deep into avant-garde and krautrock land again. That and a lot of folk rock.

The flutes is the only thing that connects these two bands; Jethro Tull and Rufus Zuphall. On Phallobst, Rufus Zuphall has created their own universe with some blues, hard rock, avant-garde, folk rock and krautrock.

Most of the material on this thirty-seven minutes long album is instrumental. The vocals is very good though. But the instrumental music here is very intriguing and introvert. Sometimes with open outbreaks of pure blues and folk rock. But mostly introvert music where less is more.

This is not an easy listening album and it has taken a long time for this album to grow on me. And it is not a great album by any means although some of you will disagree with that. This is a good album though and one of a kind. It is indeed a very original album and I cannot remember I have heard anything like this album before.

In short; this good album is well worth checking out.