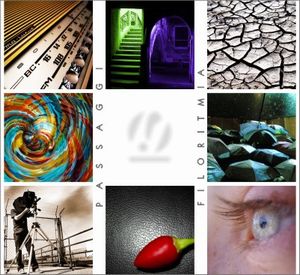 The second and so far latest album from this Italian band.

I reviewed their 2000 self titled debut album for ProgArchives many years ago. An album I liked a lot. Hence, it about time to review their second album too.

I have no idea if this band is still alive. Their website is still up and running though.

Filoritmia was a five piece band with a lineup of guitars, bass, drums, keyboards and Italian male vocals. The vocals are very good.

And yes, this band sits loosely within the RPI genre. They are a bit heavier than most RPI bands without being a metal band. Their music is not metal at all, but it is hard rocking. That combined with normal RPI makes a good blend.

Strangely enough, I have more or less made the same observations about Passagi as I made about their self titled debut album. Strange.......

The music is clever, well crafted and with a lot of substance. The art of writing great or even good songs is not something this band has grasped yet.

There is a lot of interesting details scattered around this album and that is what saves this album from being a not so good album. This one hour long album is pleasant enough and I am awarding it a weak good rating. Hence, check it out. But don't expect anything great.