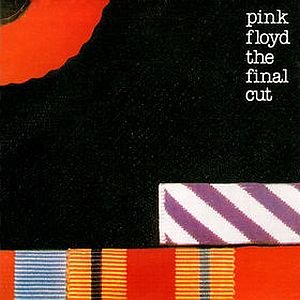 The twelfth album from these English legends.

Pink Floyd is commercially the biggest ever prog rock band. It can also be argued that they were also the biggest band in artistic terms too. I am in four minds (Yes, Floyd, Crimson and Genesis) about that. But just let us say that they were and still is massive. They have left us some truly brilliant albums.

After the massive double album The Wall, which Roger Waters is still touring, there was some internal power struggles within the Floyd camp. Richard Wright was thrown out of the band and Pink Floyd was reduced to Waters, Mason and Gilmour. That and a lot of guest musicians. On the next album again, Waters was out and Wright was in........

I am not so sure if The Final Cut is a Pink Floyd album at all or just a piece in the fight over who owned the Pink Floyd name. Roger Waters won the first battle as this is his album. More or less a solo album where Gilmour and Mason is reduced to being do-as-you-are-told members.

There is not much Pink Floyd to be found here. There is a lot of Roger Waters and his preaching vocals over some piano and sporadic other instruments. Gilmour is making an appearance now and then. But minimalism is the name of the game here.

Roger Waters sounds peeved off and disillusioned throughout the whole album. This album is firmly within the "angry albums shouting at you" genre. And that is all.

There are a few good bits here and there. And there is some annoying bits too. This is a decent album and nothing more than that. It is also the least interesting Pink Floyd album I have ever heard.