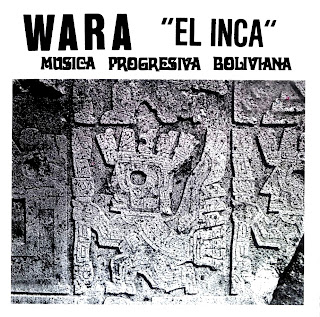 The debut album and I believe the only album from this band from Bolivia.

Yes, this blog takes me to many different scenes and countries. Music wise, that is. Bolivia is quite an exotic country in South-America.

Wara was a three piece band with a lineup of guitars, bass, drums and vocals. Spanish vocals. Wara should be included in the west coast South-America scene which includes some bands from Equador, Chile and Peru too. They got the same style of music and sound as the other bands from that area and scene.

Take a chunk of folk rock and add a lot of psychedelic and hard rock. There is a lot of hard rocking blues here too on this half an hour long album.

The sound is not particular good and the music sounds a bit generic and dated. This was the music of those times and this was proper rock'n'roll. There is no pampering to the pop and rock crowd on this album. No compromises is the ethos here.

There is not any good songs either. It is not an interesting album either. The band and this album shows some flashes of good things here and there. Hence my rating.