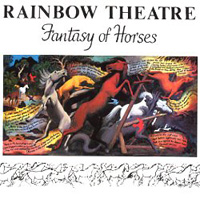 The second and final album from this Australian band.

I reviewed their 1975 debut album The Armada back in November 2011 and quite liked that album. It was a mix of opera, jazz and prog rock.

The band still got numerous members with a lineup of keyboards, bass, guitars, drums, violins, operatic vocals and everything of what woodwinds can offer up.

This is indeed a rock opera of some sort. And I mean OPERA. Not one of those overblown pomp rock concept albums. Opera with a lot of classical music, a lot of prog rock and Tijuana Mexican horns. So much that this is very much an avant-garde album. Almost RIO too.

Most of this thirty-five minutes long album works. Some of it does not work at all. There are large pieces of good music intersected with some not so good bridges and melodies connecting all this good music.

Melodic and easy on the ear, this album is not. The opera vocals is of the atonal sort. The horns is weird. Nevertheless, this is a good album and one for those interested in strange music. This is an album for you weirdos.