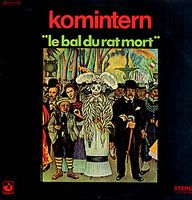 This band had it's roots in the band Red Noise. They split and this band was one of the bands who then emerged.

The band was a five piece band and they got help from five other guest musicians. The lineup is accordion, woodwinds, bass, drums, guitars, organ, piano and some French vocals.

The band was most definate a RIO/Avant-Garde band. Mostly avant-garde. This is a genre I am writing far too few reviews of in this blog. I like the genre, but is a bit too much of a coward to give it much attention. This is difficult music. Difficult.

There is a lot of very weird happenings on this album. From weird vocals to some tuba and harsh RIO like avant-garde. The final half of this half an hour long album also includes some melodic stuff. More jazzy and straight Ange like prog stuff. The first half is weird avant-garde.

This is indeed a weird album. It is strangely enough a melodic album too. I really like this album and it is a reminder that I should give this genre a lot more space on this blog.

This is a good album and I recommend it.