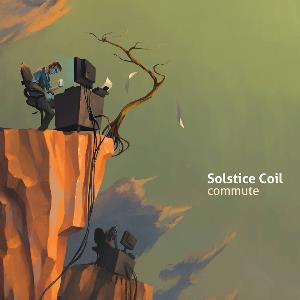 The third album from this Israeli band.

I have to say that I have never really taken this band to my heart. "Never" means on their two first albums. Their music is too bland and has a finger in too many pies, in my view.

The band has returned again as a five piece band after a successful audition of band members. Or maybe they have stuck to their original members. I am here referring to their Dream Theater parody video on Youtube. I am not so sure if the triangle man got the gig. I need to find out as the tensions in my office is unbearable right now.......

The lineup is guitars, vocals, bass, drums and keyboards. The standard lineup. And the band is very good at what they are doing. On their instruments, that is.

The band is very much somewhere between art rock, rock and progressive metal. The music is not as hard and metal as I expected from a band who has associated themselves (by accident or not) with Dream Theater. They are more like a softer prog rock version of Dream Theater. The sound is DT'ish.

It all therefore comes down to if their songs are any good. And they are. Again, I find their music a bit too bland and a bit too mainstream for my liking. I wish a bit more personality and personal flavours. Like a bit more Israeli and middle east twangs to the proceedings. And I don't necessary means as much as Orphaned Land. But a bit personality does not harm the music.

This is a good album and it will please those who takes time to listen to this album. It pleases my ears. A killer track or two plus a bit personality is the difference between good and great in this case.
Check out this album.