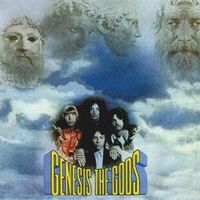 The debut album from this English band who released two albums.

The Gods is most know as the keyboards god Ken Hensley's first band. The Gods is in many ways the forerunner for Uriah Heep as there were some others Uriah Heep members who also served their apprenticeship in this band.

Another fun fact about this album was that the Ozzy Osbourne drummer Lee Kerslake also played drums on this album. He was also a longtime member of Uriah Heep too. The two other members were Joe Konas on guitars and the later Carmen and Jethro Tull member John Glascock played bass on this album. The Gods were indeed gods in their own respect.

The year was 1968 and psych rock was one of the genres who broke out of England and USA. In this case, with a pretty hard sound. The sound is pretty good too with a great guitar sound and some good keyboards.

This almost forty minutes long album is a rather decent to good album. Yes, the music is both dated and very naive. It has this beat sound and all the flavours of the 1960s. It is an album well worth checking out too. I quite liked it.