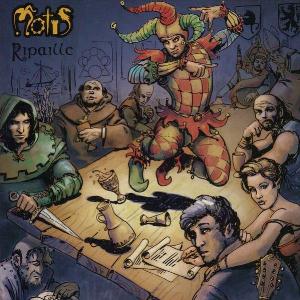 The fifth album from this French band. A band who has taken up the baton from Ange and run with it.

Motis music is typical French symphonic prog. That means music deeply rooted in French folk music with a medieval touch. Or a large medieval platform in the case of this album. Recreating the medieval tradition and transferring it to a symph prog tradition is the concept behind this album. Motis has succeeded.

The music is mainly vocals lead with a lot of acoustic instruments, moog, melotron, bass and drums adding the additional textures.

The songs are mix of symph and folk prog. Those of you who love Ange would also love this album. It is not a copycat album. It is the same mould, but with it's very own identity. Both this album and Motis are slightly more folk rock orientated than the outputs from Ange.

The result is a great album who proves why French symphonic prog is so great. There is hardly any weak points on this album. A killer track is missing and that is my only gripe with this album. It is an album well worth checking out.