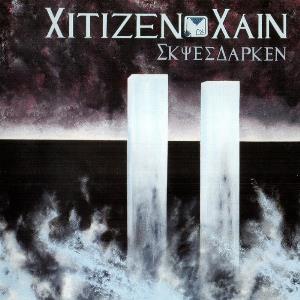 This band was one of the bands who turned me into prog rock in the first place. I have never reviewed one of their albums despite of being a happy owner of all their albums. Strange, but that is how life has turned out.

Citizen Cain was among the first ever neo prog bands to hit the scene together with Marillion, IQ, Pendragon and Pallas. Citizen Cain is more on the symphonic dark end of the scene though. The album titles says it all; Skies Darken.

The vocals is still very Peter Gabriel like and the music pretty symphonic. That and very dark. It starts out like a prog metal album and thankfully opens up as a neo-symph prog album after that. Very dark with a lot of prog metal/Dream Theater influences throughout.

Unfortunate, my main gripe is the lack of any great tracks here. This is an album I really loved during the first 2-3 listening sessions before the lack of any great tracks became a problem for me. Besides of that, this album offers a lot and I rate this as a very good album. The dot over the i is missing though. It has rekindled my interest in this band and more reviews will follow.