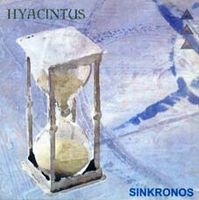 Hyacintus was an Argentine project run by the multi-instrumentalist Jacinto Corral. He released three albums under this name and Sinkronos is the final album in this trilogy.

Hyacintus was loosely speaking a symph prog band on their first two albums. They have turned more towards the likes of Alan Parsons Project on this album though. A lot of vocals and normal rock with some more keyboards orientated new age symph prog pieces filling in the gaps. Almost an hour with this mix.

The music is pretty boring and uninspiring. It is bland, to say at least. There is no good songs here either. The vocals pretty bad. The sound is not good either. This just feels like a project where the creator has taken the leave of his/her senses and gone for something from her/his too much sun induced dreams. There is no bite in the material here and no real substance. This is an album you put on when you want your guests to leave the house.

So.......The first album from Hyacintus was good while the second album was a step backwards. Sinkronos again is a disaster, more or less.