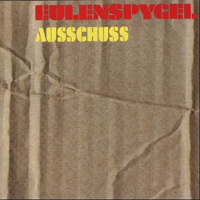 Eulenspygel was a band from West Germany on the extreme political left side and Ausschuss was an album who were a vehicle for their message and views. The music is pretty much straight rock/pop with some heavy prog elements. I would compare the music here with the first three Deep Purple albums. That and krautrock. This is indeed a krautrock album.

The music is performed with keyboards, guitars, bass, drums and vocals. The music is fitted around the German vocals which is the missionary type of vocals. The band has a message. It is being delivered on Ausschuss.

This is a very decent to good album which is far too vocals dominated for my liking. The music is not that good either. Decent is the word I would use.  Hence my rating of this album which has failed to live up to my expectations.