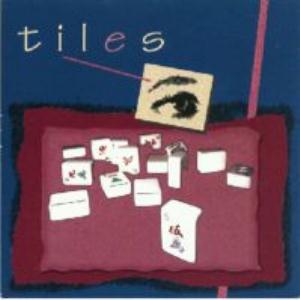 I have always thought this band was from Canada. I have been wrong all the way. I have always wanted to review their albums as I am a fan of Rush. I have therefore collected their albums and will now review all their albums in the coming weeks and months (yes, I wrote the same thing about Steve Hackett too).

Tiles was a three piece band on this album with a lineup of guitars, keyboards, drums and vocals. The bassist was a session music and the fourth musician on this album.

I have no idea why this band has caught my imagination...... The album covers, perhaps ? This is their debut album and the album cover is pretty poor, it has to be said.

What we get here is a bit of a mix of neo-prog and prog metal. The vocals are OK and just about right for this album. The music is on the naive and light-weight end of the scala. The band has yet to embrace complex song structures. Well, I hope they did that on their coming albums. Otherwise, this band and their disco will be a test of both my tolerance and stamina.

The music and sound is rooted in the early 1990s and has a lot in common with those days Rush. The Roll The Bones album springs to mind.

There are also some heavy metal stuff here. That stuff makes me cringe. And we also have some neo-prog.

In short, this forty-six minutes long album offers up a lot. But what is sorely missing here is good songs. There are none. This is nevertheless a decent album with some hints of talents.