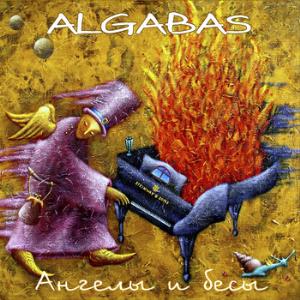 The debut album and so far the only sign of life from this Russian band.

Algabas is from the Russian town Vladimir, 200 km east of Moscow. Russia is a vast country (and I am a geography buff) and I had a bit difficult finding it's location within Russia on Google Maps. But I found it. The town looks like a typical Russian town. Functional and well planned with some pretty sights.

Algabas is a four piece band with a lineup of guitars, keyboards, bass, drums and.......... Russian male vocals !! A big plus in my books.

The album is also a free download Bandcamp album too. Get it from here.

Algabas has chosen to follow the paths somewhere between neo-prog and heavy prog. They are rightly listed as a Heavy Prog band in Progarchives. The music is not that heavy though.

The music is pretty much neo-prog, in fact. But what makes it heavy and different is it's heavy leaning towards Russian folk and rock music. Russia is a big, big country. Something reflected in their music and language. Russian is a heavy, highly profile language. And the vocals are pretty prominent here.

The end result is a much heavier album than if an English band had recorded this album. It is also a brash album with a lot of flavours.

It is also like a breath of fresh air. The songs are all good. The Russian culture and flavours gives this album something extra. Something I have never heard before from a neo-prog and that kind of progressive rock band.

It does the band no damage whatsoever that they are good musicians too. There is a lot of very interesting details on this album.

In short, this fifty minutes long album proves that free albums too is well worth checking out. This album is as professional and good as any £ 12 albums. So get this gift, this album and enjoy.