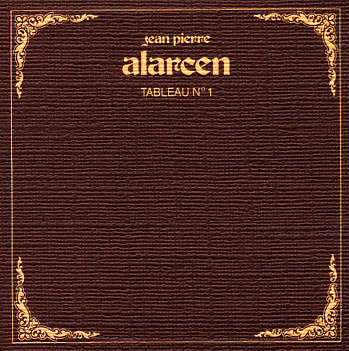 The second album from this French composer who released three albums between 1978 and 1998.

Jean Pierre plays guitar and keyboards here. He is helped out by only six other musicians. They contribute with more keyboards, bass, drums, percussions and orchestral direction. Some parts of a symphonic orchestra is involved here.

His self-titled 1978 debut album were a mishmash of jazz and classical music. One track was jazz, the following track was classical music and so on. Not the way to please me and I was not pleased in my review of that album.

Jean Pierre Alarcen has gone for a symphony this time around. A symphony in three movements. A symphony with guitars, bass, drums and keyboards in addition to some sprinkling of traditional symphonic orchestra instruments.

A forty minutes long symphony with a generous sprinkling of jazz and rock. This is by no means my favourite type of music as I find this type of music very regressive and false. It is indeed fake, this music style.

The music here is pretty decent throughout. But it leaves me a bit cold and very bored. I have to conclude that Jean Pierre Alarcen is probably a great guy. But his music does not do anything for me.