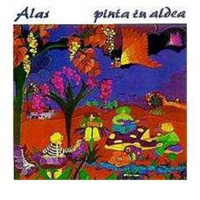 The second of in total three albums from this Argentine band.

The band had released their self titled debut album back in 1976. An album pretty much praised everywhere. But it took them seven years, seven years of the worst years of the military dictatorship in Argentina to come up with their second album.

The core of Alas and this album was trio with a lineup of synths, woodwinds, bass, drums, percussions and acoustic guitars. The trio got some help from three other musicians who contributed with flutes and bandoneon.

The band is listed a fusion band in the almighty ProgArchives. Something I agree with. The fusion here is with more than rock, though. Add some avant-garde, symph prog and folk rock to the baseline of jazz. Both Weather Report and some Italian avant-garde bands springs to mind here. Most of this album reminds me a lot about the Canadian band Maneige. In particular when it comes to the use of flutes, folk and jazz.

This album is forty minutes long and divided on four tracks.

The album is a slow starter and really never kicks on. The material here is a mix of decent and good material. I am not as much fan of this album as my friends are. It does not excite me.

That said, this is not a bad album. Hence my verdict.