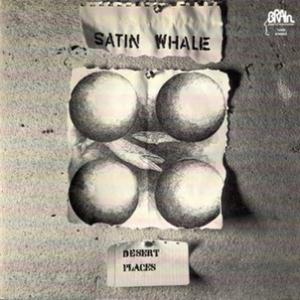 Satin Whale was a quartet with a lineup of guitars, bass, drums, flute, saxophone, keyboards and English vocals.

Satin Whale released six studio albums and a live album between 1974 and 1981. They were a moderate successful band in Germany and not so known outside Germany... make that West Germany back in those days. Their first three albums are a bit sought after these days as the band is loosely associated with the prog rock scene.

Desert Places is not a progressive rock album though.

Take a lot of blues, soul and hard rock. Inject some folk rock to their sound and you get this album. A pretty commercial sounding album it is too.

Most of all, this is a hard rocking album with some screaming guitars and some heavy keyboards. There are also a lot of soul here with the saxophone involved. The flutes drags the music slightly towards Jethro Tull. But only slightly.

I am by no means fan of this type of music. But I cannot deny that the songs here are good and there is a lot going on here on this forty-three minutes long album. Forty-three minutes divided on five songs, where the longest song is clocking in at almost thirteen minutes. This album defends the good reputation this band has now got, long after they split up.