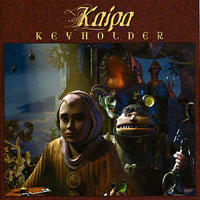 The seventh album from this Swedish band.

Kaipa is in many respect the grandfathers in the Swedish symph prog movement. The band who to a large extent created the Swedish sound. A sound later copied over by The Flower Kings and others. In the middle of both bands; we find Roine Stolt. He is one of the greatest alltime men in the progressive rock movement. A living legend, no less.

Having him both on this album and in The Flower Kings creates a bit of a problem, though. OK, a small problem. The bands sounds a bit too like in my opinion. That was in particular the problem on the previous album, Notes From The Past.

Keyholder is an eighty minutes long album though and the band has moved a lot towards Yes on this album and a bit away from The Flower Kings. Yes anno Close To The Edge, that is. The opening track Lifetime Of A Journey is very much in the Yes vein. And that is good !

The rest of the album is very much Yes meets the Swedish forests and The Flower Kings. It is a proper Kaipa album with female vocals on the part of this album too. The songs are very majestic and this time, very varied and takes the listener to many different places. Many places and styles. But all within a Swedish symphonic prog setting.

So far, this is their best album and the one Kaipa album I have enjoyed most. It is a great album and one who cements their place as one of the truly great prog rock bands.