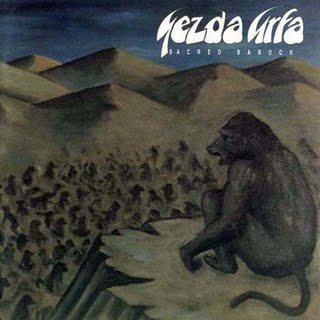 Their second and so far final studio album from this US band.

There has always been a pretty big, unfilled void between Yes and Gentle Giant. A void largely filled by this band and mostly only them. Something I find very odd because a Yes & Gentle Giant fusion combines the best elements from both symph and eclectic prog. Just like this and their previous album Boris.

The music on Sacred Baboon twists and turns as on a good Gentle Giant album. The turns are sometimes straightened out by a Yes like melody line. The sound is a combination too and based on keyboards, guitars, bass and drums. That and some great vocals.

Most of the songs are intricate and long. They are more like small compositions than melodies. The sound is great and there is enough in the music to make me marvel at what comes out of the speakers. Marvel and grin like a Cheshire cat who has just got cream. This is what I call art rock which appeals more to my few remaining brain cells than any other body parts.
All the songs, make that compositions, are great here. A killer tracks could had been the dot over the i though. But I am not complaining. Both this and their previous album Boris is in my view two gems and should be found in every good homes.