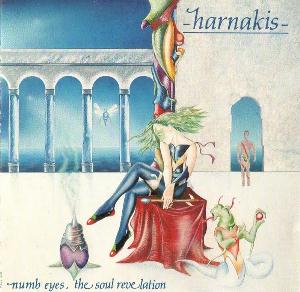 Here yesterday, gone today. That can be said about this band which was a one album only band from Spain. They came, released this album and vanished without a trace again.

Harnakis was a neo-prog band which fused in some Spanish music too into their songs. Not much, but some of the more flamboyant technical tracks here has a lot of flamenco in them. The songs are pretty intricate and technically driven with guitars, bass, keyboards and drums. That and their weakest link; the vocals. Vocals which is pretty abysmal. The music itself is not immediate catchy. But it has a lot of soul and longvity.

The end result is both an interesting and a good album which continues to give and give over several months. It is by no means a classic album and the band is not among the great Spanish bands. But it is interesting enough to warrant a search in the cheap albums bins at Amazon and Ebay.