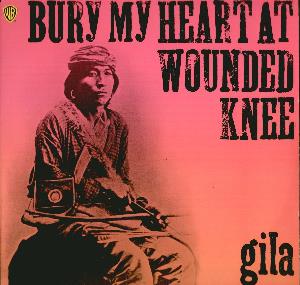 I was looking forward to sink my ears and braincells into this album as I really like krautrock. What came out of the speakers was not what I expected, though.

This Gila lineup is very different from the lineup on the first album. The music too is very different. The music on Bury My Heart at Wounded Knee is more psychedelic americana than real spaced out krautrock as on their first album. This is hardly krautrock at all. This album is more in the Velvet Underground and Jefferson Airplane mould than krautrock. That without the good music those two bands released.

Most of the music here is dithering and plodding along throughout the half an hour of trial of fire this album is. Vocals, acoustic guitars, bass and drums is what features most prominently on this album. There is not much quality here. It is a decent album with mostly decent songs. The listening sessions has been supported by lots of coffee though as it is difficult to really concentrate on this pretty dull music. Sorry, but this is not a good album.