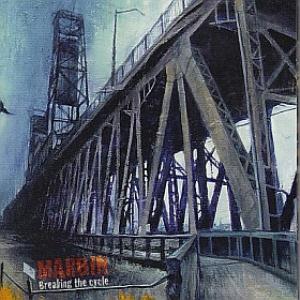 Marbin is an Israeli - US based project and Breaking The Cycle is their second album. It was released on the highly respected MoonJune Records.

This band has been described as a fusion band. I am not sure which music types they have fused to get this album though. OK, jazz and rock seems a good bet. But this album sorely lacks a great deal of the intensity from jazz and the rock part is also not that prominent either. Instead, Breaking The Cycle is breaking new tracks on the side of rock, fusion and jazz. More like a fusion between jiddish music and rock is my take on the fused elements here. Jiddish lullabyes and folk music in particular. There is a great deal of melancholy and sadness on this album. Sadness very much taken from the tragic history of the much maligned and persecuted Jewish people. You can find it all on Breaking The Cycle.

This album is mostly instrumental and based on saxophone as a solo instrument and guitars as added textures. The playing is laidback and reflective melancholic. The band does an excellent job. The final song Winds Of Grace includes vocals from Daniel White and is also very melancholic.

This album is by no means the usual fusion fare and should be approached with a lot of caution. It is a very good album though, although it does not hit the right notes with me. But it is still recommended by me.