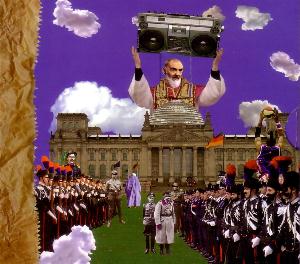 The debut album from this new Italian  band.

Catafalchi del Cyber plays a kind of art rock with a strong emphasis on a vintage mellotron sound, melody lines which sometimes has strong Middle East folk music affiliations and a lot of King Crimson connotations. This in addition to Smashing Pumpkins and modern art rock influences. That in addition to a lot of influences from early Genesis. Catafalchi del Cyber plays indeed modern Italian progressive rock which has soaked up a lot of influences from the last forty years of music.

The mellotron sound is supported by some gentle electric guitar pickings and great vocals. Sometimes, Catafalchi del Cyber breaks out into long guitar solos too. The emphasis is on creating moods and soundscapes instead of proving technical capabilities. This is music which works for both brain and heart (lowering the pulse). The music that laid back and "cool". Which reminds me a lot about the West Coast rock scene. USA, that is. But most of all; about King Crimson.

All songs are great throughout and the mellotron sound really makes my heart strings sing. There is no real killer tracks here though. But all songs are really great and this band is high on my list of bands to look out for in the future. Italy has just got themselves a new great band.