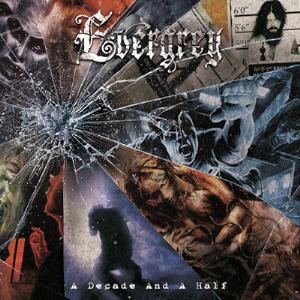 The band-name really says everything about their music in my view.

I got their debut album, a promo copy, for a previous webzine I ran back in 1998 and was not particular impressed. I thought their label Black Sun had put their money on the wrong band. But Evergrey got some commercial success and I was proven wrong. I think they are now on SPV and I got a promo copy again.

This is a best of compilation album. I have never really rated this band. Evergrey does pretty unimaginative, melodic power metal. Just the type of music that more annoys me than anything else. Some mid-hard songs together with ballads and some very commercial songs which would also appeal to the less sophisticated music listeners. Like senile grandmothers and teenyboppers for example.

I also seriously questions the whole packaging of these two CDs. You get studio and live tracks mixed together. It would had been so much smarter to put the studio tracks first and the live tracks at the end. As it is now, it is a mess, this whole compilation. Move to the nearest prison and loose 0.5 points.

Two hours of this is much more a punishment than joy for me. I rather have a mug of Early Grey tea than ten minutes with this album. But fans of standard power metal and heart vibrating love ballads performed by a male vocalist with a trembling voice should check this out. I prefer women and music with a brain though.