What The Blood Revealed - Harbour Of Devils (2012) 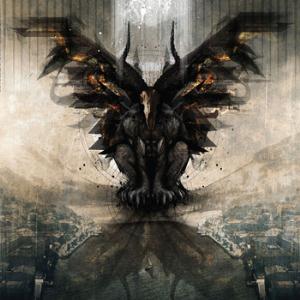 I believe I concluded my review of their last EP with the belief that I thought I would never see an album from this band. Two days later, they proved me wrong.

This is the full debut album from this Scottish band. They have also released two mini albums, years ago. Which perhaps explains the developments from these mini albums to this album.

Harbour Of Devils, a fitting description of Ardrossan in my view, although I doubt they are referring to that harbour, is still following the path set out by the two mini albums. That means pretty symphonic post rock which ebbs and flows like some big waves on the Ayrshire coast. But a pretty large chunk of sludge and funeral doom has also been added to their formula. That is the missing ingredients I have always been missing in their music. The pastoral element in their music has also been broadened and fleshed out. The music is still based on tonnes of guitar harmonies, bass and drums. It is still instrumental. But it now speaks too, despite of the lack of vocals.

Harbour Of Devils is therefore a pretty heavy post rock/shoegaze album which offers a lot of different soundscapes within the post rock/shoegaze genre. It is building moods and has succeeded in that. In this genre, this is as good as it can get. This is a great album and I hope it gets the attention it deserves.