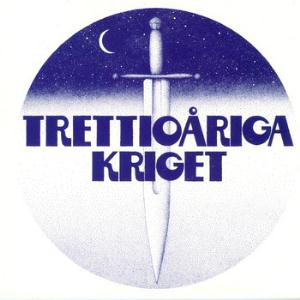 The debut album from a Swedish band who are still going strong.

Trettioariga Kriget is a band who operated well within the heavier, proggy part of the Swedish rock scene back in the 1970s. Heavy, but still sophisticated and classy. The logical comparision is Rush and those were the ones I compared them with too when I heard this album for the first time. And for the tenth time too. But there is also a lot of the Italian prog rock scene in their sound. Just listen to Mina Löjen and you get a taste of Italy. But most of all; this album is a Swedish rock album.

The instruments are the typical guitar, bass, drums, great vocals and keyboards. The vintage Mellotron sound on some songs are great. The band does a great job too.

This is the first album I have heard by this band (as a part of me reviewing all their albums...... keep tuned in for the rest of my reviews) and I am pleased with what I hear. Mina Löjen is by far the best song here. The rest of the songs is good too. This is a good debut album from a band I really want to hear more from. Onwards to the rest of their discography, me thinks.