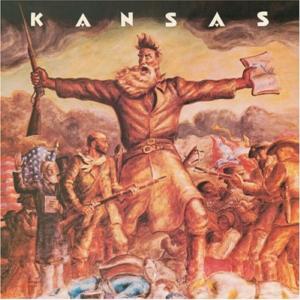 I remember I reviewed their Monolith album a year ago and did not like that album at all. So I am starting afresh again with this album, their debut album.

Kansas is an US band which I think is still going strong. They had and still have a loyal fanbase. A fanbase they got from this album and onwards. Kansas is one of the biggest progressive rock bands which has ever come out of USA.

I am not a fan of AOR at all and have been giving Kansas a wide berth due to mistaken them for being very AOR orientated. An impression not dismissed by that Monolith album. But they comes across as something entirely else again on this album.

How can I describe this music ? A mix of English progressive rock aka Yes, a lot of southern rock like Lynyrd Skynyrd plus some US rock and country. The result is a very warm, cosy album with a typical US sound from the 1970s. You can really feel the US state named Kansas in their sound. It is brash and large as the prairies.

I think the sound is great. The songs are not great though and that is my major gripe with this album. But it is a very good debut album though and it has very much rekindled my interest in this band. I have also got a lot of respect for them. Expect a lot more reviews of their albums this year. This is a nearly there album.