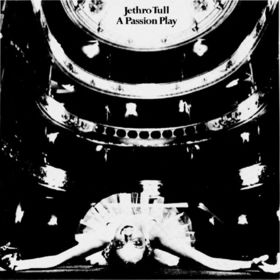 Thick As A Brick is rightly regarded as a classic. That one song album was transferred over to A Passion Play too and with both good reasons and same result.

Jon Andersson's vocals tells the story on the top of a great fusion of folk rock and symphonic rock. Jethro Tull was and probably still is the masters (= I have yet to hear Thick As A Brick # 2, just released) of this genre. The music on A Passion Play takes some time to really sink in. But when it does, it really stays with the listener and that probably for the rest of a lifespan.

A Passion Play takes Jethro Tull more into the classical music territory than on Thick As A Brick. The instrumentation is big, eloborate and clever. The feeling is still pastoral and we are not talking bombastic ELP here. By no means.  A Passion Play does not speak in big fonts and through bombastic language. It is a silent masterpiece.

And indeed, this album is another masterpiece from Jethro Tull and a joy to behold. I love this album. As simple as that.