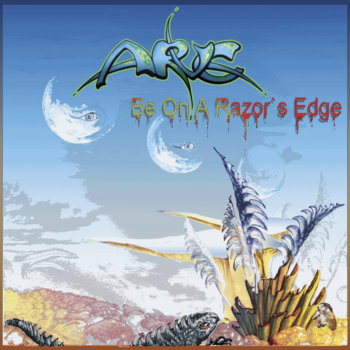 Arve is a project lead by Henny Arve from Madison Dyke and some other more obscure bands. Henny Arve has done a lot of TV work too. Henny Arve has got some help from Eloy members on this album, the second album by Arve.

Be On A Razor's Edge is a stew of a lot of things. All of it with a concept theme. This probably is a concept album with a lot of classical orchestra instruments after a very progressive rock opening with good vocals and a driving melody. The album falls into a bit of a mess halfway through, though. Yeah, this must be a concept album with all it's ills. Very overbloated at times. But at the best, this album is great though. Some really great melodies scattered around the half-decent pling plong stuff.

The progressive rock parts here is what the purists would label neo-prog. The other bits are avant-garde pling plong. The end result of a rather frustrating listen at times is a good album which has high ambitions, but no abilities to fulfill them. I would not write off Arve though. Maybe their first album was a true masterpiece. Maybe a new album will be a masterpiece. I think Henny Arve has the abilities. But a bit stricter quality control would be a good idea next time around.